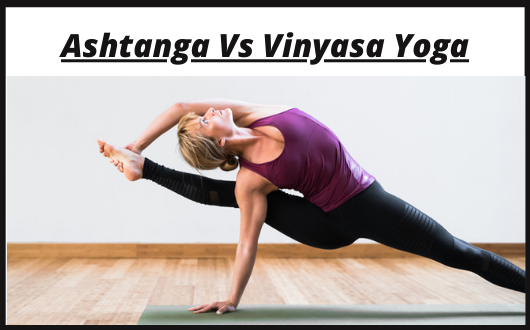 Ashtanga Vs Vinyasa – What is the Difference

Since the growing popularity of yoga, there has been a debate on Ashtanga vs Vinyasa yoga and what makes one style better than the other. The art of yoga has several styles with each one providing unique benefits to the practitioner. One should choose a yoga style that is congruent to their personal liking and also offers some impressive benefits.

Difference Between Ashtanga Vs Vinyasa Yoga

With that said, there has been a lot of debate between Ashtanga and Vinyasa yoga style. However, first, let us understand a bit about each of these.

The Ashtanga Yoga style should not be confused with the Ashtanga or the eight-limbed philosophy of the yogic art which was promoted by Sage Patanjali in the Patanjali’s Yoga Sutras. It received a modern touch in the 20th century by Sri J. Pattabhi Jois in 1948 as Ashtanga Vinyasa Yoga.

Ashtanga Yoga style is much popular in the West and practiced by many famous celebrities including the Hollywood elites. It is a disciplined and structured approach to the practice of yoga.

The Ashtanga Yoga has six defined “series” which consist of Primary, Intermediate, and 4 Advanced series. Each of these series has a set of poses which the individual practices in a preset order. The Primary Series is a bit challenging and one might have to spend years mastering every pose in this series.

Fortunately, one does the practice under the tutelage of a certified yoga teacher who determines when they are ready to move on to the next level with intermediate yoga poses. One has to commit to at least 6 times a week practice with Ashtanga yoga.

Let us now check out the pros and cons of Ashtanga yoga practice.

With Ashtanga Yoga clear, now let us move on to Vinyasa yoga.

Let us now focus a bit on the pros and cons of a Vinyasa yoga class.

With both Ashtanga and Vinyasa yoga styles described in detail, one has to find which among the two aligns with their yoga practice.