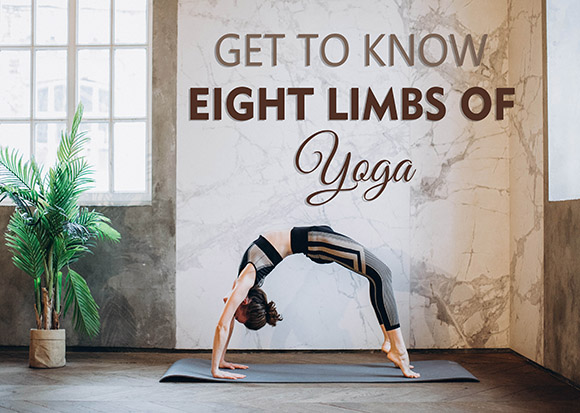 Get to Know the Eight Limbs of Yoga Explained

Out of eight limbs of yoga, the first limb, yama, deals with one’s moral standards and sense of integrity. This way, it focuses on our inner behavior and how we act towards others in life. There are five yamas, namely:

Yamas are unconditioned by class, time, and place. In simple words, no matter where you come from, who you are, or how much yoga you have practiced, you can aim to infuse the yamas within you by including this first one from the other eight limbs of yoga.

Out of eight limbs of yoga, the second limb is Niyama that refers to duties directed towards ourselves. Other than that, it can also be considered with our actions towards the outside world. Here, the prefix ‘ni’ is a Sanskrit verb that means ‘within’ or ‘inward’. There are five niyamas:

Interestingly, niyamas closely relate to the Koshas, our ‘layers’ or ‘sheaths’ leading from the physical body to the essence within.

Asanas, the postures of yoga, known as the third limb from the eight limbs of yoga. From the yogic point of view, the body is a temple of spirit, the care of which is a crucial stage of our spiritual growth. Through the regular practice of yoga asanas, we develop the habit of discipline and the power to concentrate – both of which are essential for meditation.

Generally termed as breath control, this fourth limb comprises of techniques intended to gain mastery over the respiratory process while determining the connection between the mind, the body, and the emotions. It literally means ‘life force extension’. Yogis believe that it not only revives the body but also truly extends life itself. Pranayama, one of the eight limbs of yoga, can be understood as prana-yama means breath-control.

Pratyahara is another limb in the list of eight limbs of yoga, which means withdrawal or sensory existence. Pratya means ‘withdraw’ and Ahara refers to anything we ‘take in’ by ourselves like various sounds, smells, and sights that our senses take in continuously. When we sit in a formal meditation practice, pratyahara is likely to be the first thing we do when we think we are doing meditation. In other words, we focus on ‘drawing in’.

Dharana – in the eight limbs of yoga, stands for ‘focused concentration’. Here, Dha means ‘holding and maintaining’ and Ana means ‘something else’. Closely associated with the previous two limbs, dharana and pratyahara are important parts of the same aspect. To focus on something, the senses must withdraw so that we can put all attention to that point of concentration. Focusing on the breath, Tratak, and visualization are some practices of dharana.

Dhyana or Meditative Absorption stands at the seventh position in the list of eight limbs of yoga. When we become completely indulged in the focus of our meditation and this is the stage when we are actually meditating. At this stage, the mind has become completely calm and in the stillness, it generates few or no thoughts at all. You can integrate it into your daily yoga vinyasa routine.

Also Read: Vinyasa vs Hatha Yoga: Which is Right For Me?

The eighth and last limb of ashtanga is Samadhi – a state of ecstasy. Here, Sama means ‘equal’ or ‘same’ and Dhi means ‘to see’. This stage is also called realization. It is because reaching samadhi is not about escapism, being abundantly elated, or floating away. Instead, it is all about realizing the life that lies in front of us. The ability of ‘see equally’ – whether it is a joy or sorrow, with no need to judge or become attached to any specific aspect, with no experience being conditioned by habits, likes, or dislikes – this is bliss.

Although this may sound like a lofty goal, in experience, it is pretty simple and brings a seismic shift to the way we practice. When we start our journey through the eight limbs of yoga as a dynamic whole, we start to find our true self. All duality and struggle shifts to illuminate the light that we are.