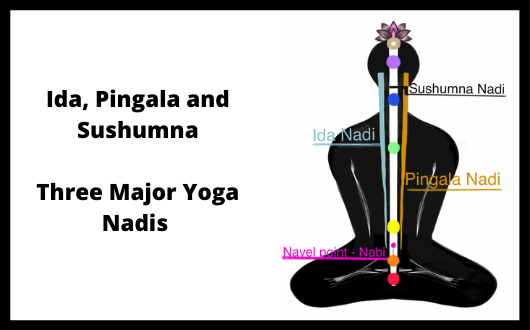 Just like there is a physical body, a subtle or an energy body is also there. Further, the energy body has about 72,000 Nadis. A Nadi can be roughly translated to a nerve. Out of all the 72,000 Nadis, there are three most important Nadis. These are Ida, Pingala, and Sushumna Nadi. As per the placement, these Nadis pass through your body along your spine.

Energy transfer or flow is one of the major functions of these three fundamental Nadis. Starting from the base of your spine, these go all the way up to your head. Hence, in the deep Samadhi state, it leads to the flow of energy to your crown chakra. Further, it helps in forming a strong connection with the Universe, Divine, or God.

With that being said, let’s have a brief introduction to each of the three Nadis. This helps you to learn better about each Nadi. Read on.

The position of the Ida Nadi is at the left side of the spine. It begins from the root chakra and crosses over with the Pingala Nadi at the third eye chakra.

Furthermore, it is known as the ‘comfort level energy’. Being Yin in nature, Ida Nadi has feminine qualities that are passive. Moreover, it lies to the left side of the Sushumna Nadi. Balance is the key element of nature. Therefore, to balance out the Ida Nadi energy, Pingala Nadi comes into action.

When it comes to the representation of the Ida Nadi, the white color perfectly depicts its existence. Moreover, the Ida Nadi has a closer relation to the moon. Furthermore, the Ida Nadi is considered to have an inert nature out of Pingala and Sushumna Nadi.

As mentioned above, Pingala Nadi is complementary to the Ida Nadi. Hence, it is of active and Yang nature. Where Ida Nadi signifies the moon, the Pingala Nadi has a closer relation to the sun. Hence, it is also called Surya Nadi in various contexts.

The emergence of the Pingala Nadi is also at the root chakra in the energy body. As far as the position is concerned, it rests on the right side of your spine. Furthermore, the Pingala Nadi crosses over the Ida Nadi at the third eye chakra.

The red color identifies the vibrations of the Pingala Nadi. Further, connection with the sun gives it a dynamic nature.

The most important of the three Nadis in the subtle body, the Sushumna Nadi benefits the human body with its neutralizing energy. It begins at the root chakra and goes all the way to the top of the head or the crown chakra.

Sushumna Nadi acts as a neutralizer or a pacifier that works on creating a perfect balance between the Ida and the Pingala Nadis. Also, the Sushumna helps in the awakening of the Kundalini energy. Hence, it raises your consciousness, awareness, and energy.

The flow of energy through the Sushumna Nadi helps you reach the deepest state of meditation, that is Samadhi. Also, it has the qualities and nature of both the Ida and Pingala Nadis.

One major myth is that both the Nadis cross over or intersects each other at every energy center or chakra point. However, that seems not to be the truth. They merely touch each other but intersect only at the third eye chakra.

As you can see, Ida, Pingala, and Sushumna Nadi summarize your entire being in just a few elements. Hence, focusing on balancing, purification of the energy, and removal of impurities from these energy Nadis should be your concern.

When you do that, you attain harmonious nature that helps in living a happy life.